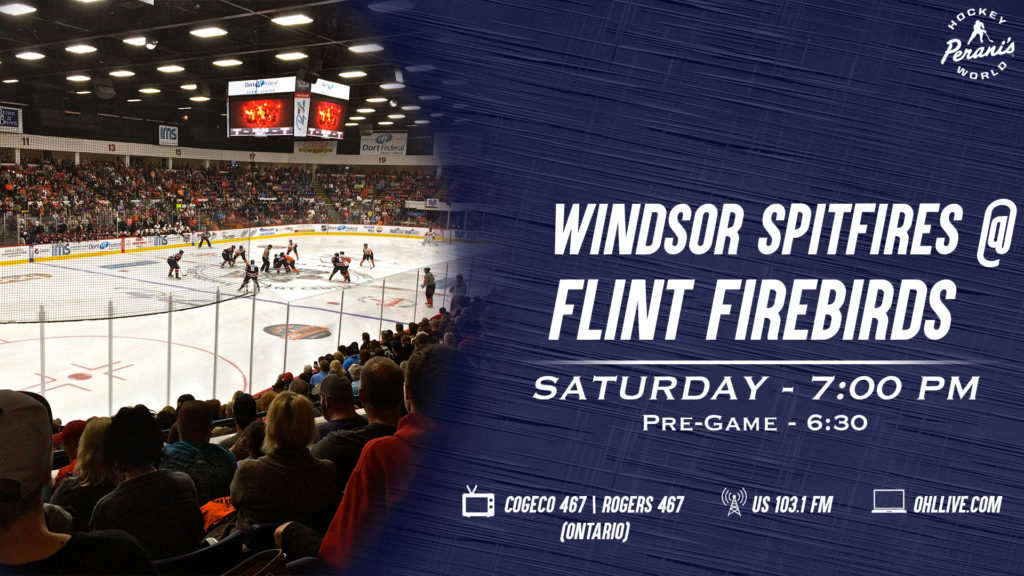 Saturday marks the fourth of six meetings between the two clubs, and the second of three in Flint this season. All-time, the Firebirds hold a record of 9-17-1-0 versus the Spitfires, and a record of 3-10-1-0 at the Dort Federal Event Center. Last season the ‘Birds went 4-2-0-0 in the series, winning two of three games at home.

Windsor had the upper hand in all three prior meetings this season. Flint has skated to 7 – 5 and 5 – 2 defeats on the road and a 5 – 2 defeat at home thus far. In the three games this campaign, Evgeniy Oksentyuk (1G, 7A) and Riley McCourt (6A) have led the Firebirds’ offensive charge. Egor Afanasyev (Nashville Predators) has eight points (4G, 4A) and Tyler Angle (Columbus Blue Jackets) has six (2G, 4A) to lead Windsor on the scoresheet in the series.

Flint Firebirds (21-16-1-0, 3rd West Division):
Ty Dellandrea (Dallas Stars) rejoined the club last night after winning a gold medal with Team Canada at the IIHF World U20 Championship (World Juniors) in the Czech Republic. Prior to leaving Flint to join team Canada, Dellandrea scored an impressive six goals and five assists in his final three contests. He added two assists last night and carries a four-game point-streak (6G, 7A) in OHL play. For the season, he ranks third for Flint with 17 goals and 22 helpers in 28 games.

Belarusian forward Evgeniy Oksentyuk tops the club with 19 goals and 27 assists for 46 points in 33 contests. He extended his current point-streak to 15 games with two assists last night, officially making his the longest point-streak (11G, 16A) in Firebirds’ franchise history. Oksentyuk now has 14 multi-point games this season.

Defenseman Riley McCourt recently surpassed former Firebird Matt Henderson for most goals scored by a defenseman in a Firebirds’ uniform with 21 pots in the orange and navy blue. McCourt’s 87 total points with Flint are just three shy of tying the record for all-time points by a Firebirds’ rearguard. For this season, McCourt is second in total offense with 11 goals and a team-high 30 assists for 41 total points in 38 games. His total points are fourth-most among OHL rearguards, his 11 tallies are tied for sixth, and his 30 helpers are tied for fourth. McCourt also has also scored the first goal of the game three times this season, the most by any defenseman.

Behind McCourt is a trio of defenders with NHL ties. The newest addition to the blue-line troops is Tyler Tucker (St. Louis Blues). Tucker has eight goals and 22 assists through 30 games-played. Vladislav Kolyachonok (Florida Panthers) has 21 total points (9G, 12A) and Dennis Busby (Arizona Coyotes) has 18 points (5G, 13A). Kolyachonok is tied for tenth in goals-scored among defenders.

Brennan Othmann leads the freshman class for the ‘Birds with 20 total points (8G, 12A) through 30 games. His point total is tied for eighth among rookies in the league, his eight goals and his 12 helpers are both tied for seventh.

Between the pipes, Anthony Popovich has played in 28 games this season. He’s earned 15 victories, which are tied for the fourth-most in OHL. His goals-against average (GAA) is 3.80 and he has the ninth-best save-percentage (SAV%) in the league at .897. Luke Cavallin has six wins in 13 appearances, and he carries a 3.83 GAA with a .896 SAV%.

Windsor Spitfires (24-9-4-0, T-1st West Division):
Egor Afanasyev (Nashville Predators) leads the Spitfires with 27 assists and has 44 points in 37 games. Afanasyev rides a 12-game point streak (9G, 10A) into Saturday’s tilt. Fourth-year forward Tyler Angle (Columbus Blue Jackets) leads the Spitfires with 20 tallies, and he has 23 helpers through 37 games-played to sit second in total points. Daniel D’Amico ranks thirds on the club with 34 total points (16G, 18A) in 36 contests.

Defenseman Connor Corcoran (Vegas Golden Knights) is tied for fourth on the club and leads the blue-line unit with 12 tallies and 21 helpers in 37 games. His 33 points are eighth-most among OHL defensemen and his 12 goals are tied for third.

First-year defenseman Ruben Rafkin has one goal and 18 assists to top the Spit’s rookie class with 19 points through 35 contests. His total assists are the second-most among first-year players in the league and his 19 points are tied for tenth.

Broadcast Coverage:
Saturday’s contest can be heard live on the radio throughout Flint & Mid-Michigan on US 103.1 FM, online at www.us103.com or by downloading the US 103 app here. Firebirds’ broadcaster Dominic Hennig will call the play-by-play action and Jack Sznewajs will provide color commentary on the Firebirds Hockey Network (FHN). Pregame coverage will begin 30 minutes prior to puck drop at 6:30 p.m. New this season, fans can watch the FHN TV Pregame Show live on Facebook and Twitter, also beginning at 6:30 p.m.