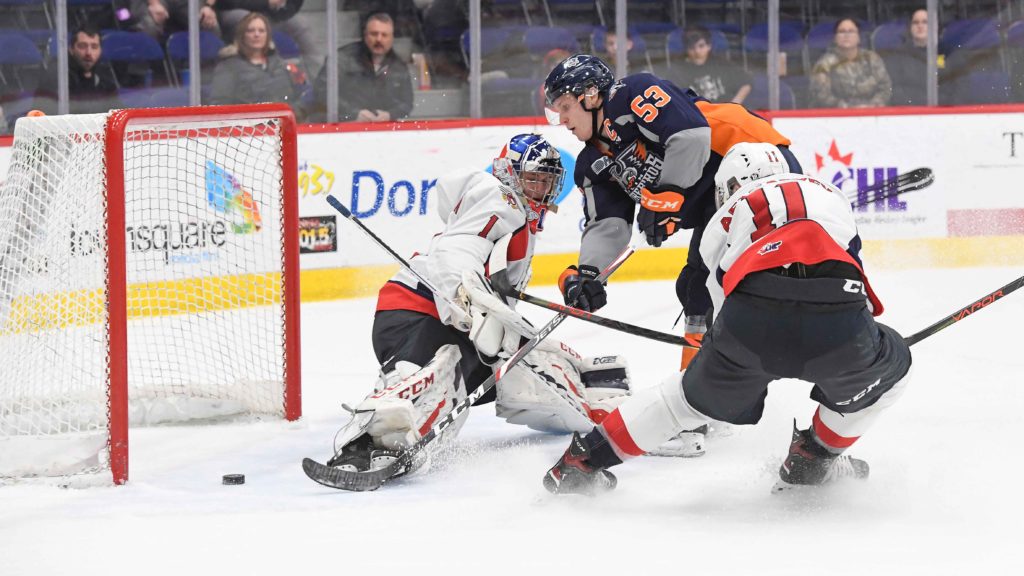 Flint, Mich. – In a game that the Firebirds never trailed in, Ty Dellandrea picked up the puck in Flint’s right corner and skated end-to-end to score an overtime winner for a 4-3 victory over the eighth-ranked Windsor Spitfires Saturday night. Luke Cavallin played an impressive game between the pipes, making 37 saves on 40 shots for his first victory of 2020. Evgeniy Oksentyuk continued his red-hot play, scoring a goal and extending the longest point streak in franchise history to 16 games. Ty Dellandrea (Dallas Stars) had a goal and an assist, including the overtime game-winning tally. Cody Morgan and Jake Durham also found paydirt in the contest. On special teams, Flint’s second-ranked penalty kill stopped Windsor’s second-ranked power play on all six of their power-play chances.

The Firebirds were first to light the lamp at 12:49 of the first period. Jack Wismer carried into the zone and backhanded a pass to Ty Dellandrea along the right wall. The Captain carried forward to the half-boards before sending a laser pass towards the Windsor goal. The puck crossed in front of netminder Kari Piiroinen and Evgeniy Oksentyuk tapped it home on a backdoor play. The goal was his 20th of the season.

The Spitfires tied the contest at 15:31. Will Cullye took the initial shot from the right circle and Luke Cavallin made a great save. The rebound went to the goaltender’s right, where Plymouth, Mich. native Luke Boca was waiting to redirect it into the back of the net for his 14th of the campaign. Connor Corcoran (Vegas Golden Knights) one was credited with the second assist.

Cavallin initiated the sequence that led to Flint’s second goal, when he made a spectacular pad-save that launched his troops on a breakout the other direction. Brennan Othmann fired a long-range shot that Piiroinen saved, but he played the puck behind his cage for his defender. An aggressive forecheck by newly-acquired Riley Piercey resulted in the Spit’s pass going directly into the high slot to Cody Morgan. He one-timed it just inside the right post for his 11th of the campaign at 18:26, unassisted.

First-period shots were 14 – 10 in Windsor’s favor. Both teams were unable to convert with one power-play opportunity in the first 20 minutes.

Flint extended their lead to a pair early in the middle frame. Riley McCourt carried in front of both benches and made a move around two defenders before launching a wide-angle shot from low in the left circle. Piiroinen dropped to the ice to make the save but Jake Durham poked at the loose puck in the crease and knocked it home for his 15th of the season at 2:37.

After a spirited scrap and a slew of penalties to both clubs, Jean-Luc Foudy emerged on an all-out breakaway during four-on-four hockey. He showed a couple of moves you would typically see in an NHL shootout before sending the puck five-hole for his 13th of the campaign at 13:48, unassisted.

The ‘Birds trailed on the shot-clock 12 – 10 in the middle frame, leaving them with a forty-minute deficit of 26 – 20. Each club had two chances with the man-advantage, but there were no goals scored on special teams.

Windsor tied the game at three just after Flint successfully killed off another penalty. Douglas set up the tying goal with a quick cross-ice pass that Connor Corcoran one-timed from the left circle for his 13th of the season at 7:49. Louka Henault was credited with the second assist.

Regulation wasn’t enough to settle the contest between the West-Division rivals. After 60 minutes of play, Flint trailed in shots 36 – 31.

Windsor was awarded a power-play chance in overtime, which results in four-on-three play. With only 20 seconds remaining in the extra frame, Dellandrea took control of the puck directly in front of Cavallin. He skated coast-to-cost, moving around two defenders in the process, and used a late forehand-to-backhand move as he traversed the low slot. Once the puck was on his backhand it took a simple tap to sneak it just inside the far post to earn the victory for the home team. Dellandrea’s 18th of the season was scored at 3:05 of overtime, shorthanded.

Final shots were 40 – 33 to Windsor’s advantage. In the faceoff circle, the ‘Birds won the majority of draws by a margin of 31 – 27. While Flint was unable to convert on three total chances with the man-advantage, their penalty-killers shut down the league’s second-best power play on six power-play opportunities.