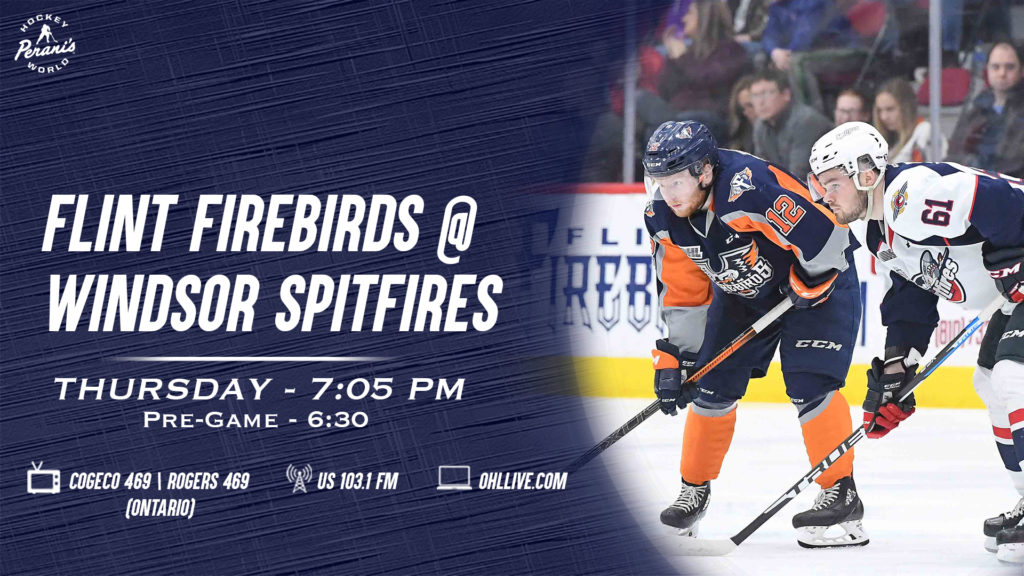 Flint, Mich. – The Flint Firebirds begin a three-in-three weekend when the club faces-off against the Spitfires in Windsor Thursday evening. Puck drop is set for 7:05 p.m. (ET) at the WFCU Centre (cap. 6,450).

Flint enters Friday’s contest having won their last four contests and earning points in six of their last seven games. The Firebirds have picked up 11 of a possible 14 points in that time and have won three-straight road games.

Most recently, the Firebirds posted a 4-3 overtime victory over Windsor on home ice in Flint. Luke Cavallin played an impressive game between the pipes, making 37 saves on 40 shots for his first victory of 2020. Ty Dellandrea (Dallas Stars) had a goal and an assist, including the overtime game-winning tally. Evgeniy Oksentyuk, Cody Morgan and Jake Durham also found paydirt in the contest.

Flint Firebirds (26-17-1-1, 3rd West Division):
Ty Dellandrea (Dallas Stars) tops the stat sheet for Flint with 26 goals and 31 helpers in 35 games. In the past four games, Dellandrea has recorded 15 points (8G, 7A) and enters Thursday’s game on a four-game point streak. Belarusian forward Evgeniy Oksentyuk sits second on the club with 22 goals and 28 assists for 50 points in 40 contests. Earlier this season Oksentyuk carried Flint’s longest-ever point-streak at 17 games (13G, 16A), which still sits tied for the fourth-longest point-streak by any OHL player this season. Recently-acquired forward Riley Piercey is heating up since joining the Firebirds. He earned 13 points in 35 games with the Barrie Colts to start the season. He now has 13 points (6G, 7A) in only nine games with the Firebirds. He rides a four-game point-streak (4G, 6A) into Thursday’s tilt in Windsor.

Defenseman Riley McCourt holds the franchise record for most goals scored by a defenseman in a Firebirds’ uniform with 23 tallies in the orange and navy blue. He recently hit 100 career OHL points and on Saturday scored his 91st point with the Firebirds, making him the new all-leader in points among Flint defenders too. For the season, McCourt ranks third in total offense with 13 goals and a team-high 34 assists for 47 total points in 45 games. His total points are fifth-most among OHL rearguards, his 13 tallies are tied for sixth, and his 34 helpers are tied for fourth. McCourt also has the fifth-highest points-per-game average among blue-liners at 1.04.

In net, Anthony Popovich has played in 32 games this season. He’s earned 18 victories, which are tied for sixth-most in OHL. Popovich’s goals-against average (GAA) is 3.74 and he’s tied with teammate Luke Cavallin for the ninth-best save-percentage (SAV%) in the league at .897. Cavallin has eight wins in 17 appearances and carries a 3.69 GAA.

Windsor Spitfires (28-10-5-0, 2nd West Division):
Fourth-year forward Tyler Angle (Columbus Blue Jackets) leads the Spitfires in goals and is tied for most total points. He has 21 goals and 25 helpers through 43 games-played. Egor Afanasyev (Nashville Predators) also has 46 points (19G, 27A) in 43 games. Curtis Douglas ranks third with 19 goals and 20 assists in 43 games.

Defenseman Connor Corcoran (Vegas Golden Knights) ranks fourth on the club and leads the blue-line unit with 14 tallies and 25 helpers in 43 games. He’s tied for fourth among rearguards in goals-scored, eighth in points and ninth in points-per-game at .91.

First-year defenseman Ruben Rafkin has two goals and 21 assists to top the Spit’s rookie class with 23 points through 41 contests. His 21 helpers are the most among all first-year players in the league and he’s tied for eighth in total points.

Between the pipes, Kari Piiroinen has made 22 appearances and earned a 3.54 goals-against average (GAA) and a .878 save-percentage (SAV%). Rookie netminder Xavier Medina has appeared in 23 contests, earning a 3.40 GAA and a .885 SAV%. Both Windsor netminders have 14 wins this season.

Broadcast Coverage:
Thursday evening’s contest can be heard live on the radio throughout Flint & Mid-Michigan on US 103.1 FM, online at www.us103.com or by downloading the US 103 app here. Dominic Hennig will call the play-by-play action and Jack Sznewajs will provide color commentary on the Firebirds Hockey Radio Network. Pregame coverage will begin 35 minutes prior to puck drop at 6:30 p.m.