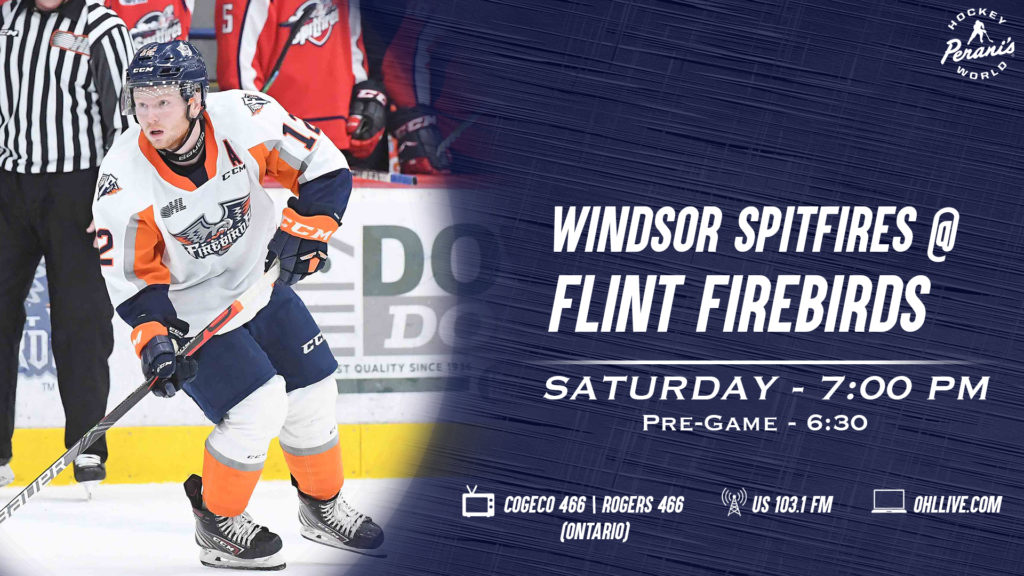 Flint, Mich. – The Firebirds face-off against the Windsor Spitfires Saturday night and will honor the club’s three overagers prior to the game. Puck drop is set for 7 p.m. (ET) at the Dort Federal Credit Union Event Center in Flint.

Saturday marks the sixth of six total meetings between these clubs and the third of three games to be played in Flint this season. This season, the Firebirds are 2-3-0-0 against the Spits and won one home game and one away game thus far. All-time, the Firebirds hold a record of 11-17-1-0 versus Windsor and are evened up at 7-7-0-0 at the Dort Federal Event Center.

Flint enters Saturday’s contest in second place in the West Division and fourth place in the ten-team Western Conference with only seven regular-season games remaining. Flint holds a record of 39-20-1-1. The Spits are currently third in the West Division  and fifth in the Western Conference  with a 34-19-7-0 record. On home ice this year, Flint has a record of 19-11-1-0 compared to Windsor’s road record of 17-10-2-0. In their past ten games, the Firebirds have a record of 7-3-0-0 and the Spitfires have gone 4-4-2-0.

The last time these teams met was January 30 in Windsor, when the Birds got the upper-hand in an 8 – 3 triumph. Team Captain Ty Dellandrea (Dallas Stars) scored twice and was named the game’s ‘First Star’ for his three-point (2G, 1A) performance. Jack Wismer was the ‘Second Star’ after scoring twice and Connor Roberts lit the lamp once to earn ‘Third Star.’ Quinn Yule picked up his first goal as a Firebird, and both former Spitfires’ forward Cody Morgan and rookie Braeden Kressler (1G, 1A) also found twine for Flint. Vladislav Kolyachonok (Florida Panthers), Tyler Tucker (St. Louis Blues) and Jack Phibbs each had two assists in the game. Goaltender Luke Cavallin earned his ninth win of the season, making 17 saves on 20 shots between the pipes.

On special teams this season, Flint’s overall penalty-kill (PK) sits fourth-best at 81.9%. On home ice, the Birds have the league’s best PK, operating at an 87.8% efficiency. Windsor’s PK unit is ranked 17th overall in the OHL at 75.8%. With the man-advantage, the Spits rank fourth in the league converting at a rate of 24.2% and the Firebirds are 14th, scoring at a 20.6% clip.

Promotions:
The Firebirds’ three “Overagers,” Jake Durham, Jack Phibbs and Anthony Popovich will be honored prior to the game. In the OHL, an overager is a player that begins the season at 20 years of age. A team is only allowed to have three overage players on their roster after the trade deadline in January, which is their final allowed season in the OHL.

Riley McCourt is the top-scoring defenseman in franchise history. For this season, he’s third in total offense with 18 goals and 42 assists for 60 total points in 61 games. He’s tied for fourth among OHL blue-liners in goals and tied for fifth in assists, and total points. McCourt’s also tied for eighth with a .98 points-per-game average. Fellow rearguard Tyler Tucker signed an entry-level three-year contract with the NHL’s St. Louis Blues earlier this week. For the season he has 17 tallies and 38 helpers for 55 points in 53 games-played. He’s tied for seventh in goals and points, tied for ninth in assists and ranks sixth with a 1.04 points-per-game average. Tucker also carries the most penalty minutes of all blue-liners in the league.

Brennan Othmann continues to lead Flint’s freshman class with 33 total points (17G, 16A) through 53 games. Othmann recently passed Ty Dellandrea (Dallas Stars) for the most-ever goals by a rookie for Flint, and he passed Vladislav Kolyachonok (Florida Panthers) for the most points by a rookie. Othmann ranks sixth among first-year OHL players in goals-scored and is ninth in total points.

In net, Anthony Popovich has played in 45 games this season. He’s earned 28 victories, which are the most by any Flint netminder in a single season and tied for fifth-most among OHL netminders this season. Popovich’s goals-against average (GAA) is 3.66 and he has a save-percentage (SAV%) of .896. Peyton Grainer was recently recalled from the Detroit Belle Tire AAA Major Midget Hockey Club for the past week, and he made six saves on seven shots in a relief effort for his OHL debut between the pipes last Saturday night.

Windsor Spitfires (34-19-7-0, 3rd West Division):
Egor Afanasyev (Nashville Predators) and Tyler Angle (Columbus Blue Jackets) lead the Spitfires, each with 65 points in 60 games-played. Afanasyev has 29 goals and 36 assists, whereas Angle has 28 goals and 37 assists. Curtis Douglas (Dallas Stars) ranks third with the most goals on the club (30) and 60 total points through 60 contests. Douglas is currently riding a four-game point-streak (6G, 2A).

Defenseman Connor Corcoran (Vegas Golden Knights) ranks fourth on the club and leads the blue-line unit with 18 tallies and 34 helpers in 60 games. He’s tied for fourth among rearguards in goals-scored, and is 10th in total points. Corcoran’s eight power-play markers are tied for fourth most among blue-liners.

Wyatt Johnston tops the freshman class for the Spits with 12 goals and 18 assists in 51 games.

Between the pipes, Kari Piiroinen has made 29 appearances and earned a 3.69 goals-against average (GAA) and a .874 save-percentage (SAV%). Rookie netminder Xavier Medina has appeared in 36 contests, earning a 3.48 GAA and a .885 SAV%. Both Windsor netminders have 17 wins on the season.

Broadcast Coverage:
Saturday evening’s contest can be heard live on the radio throughout Flint & Mid-Michigan on US 103.1 FM, online at www.us103.com or by downloading the US 103 app here. Firebirds’ broadcaster Dominic Hennig will call the play-by-play action and Jack Sznewajs will provide color commentary on the Firebirds Hockey Network. Pre-game coverage begins 30 minutes prior to puck drop at 6:30 p.m. The free to watch FHN TV pregame show begins at 6:30 p.m. and can be seen live on the Firebirds Twitter account here.