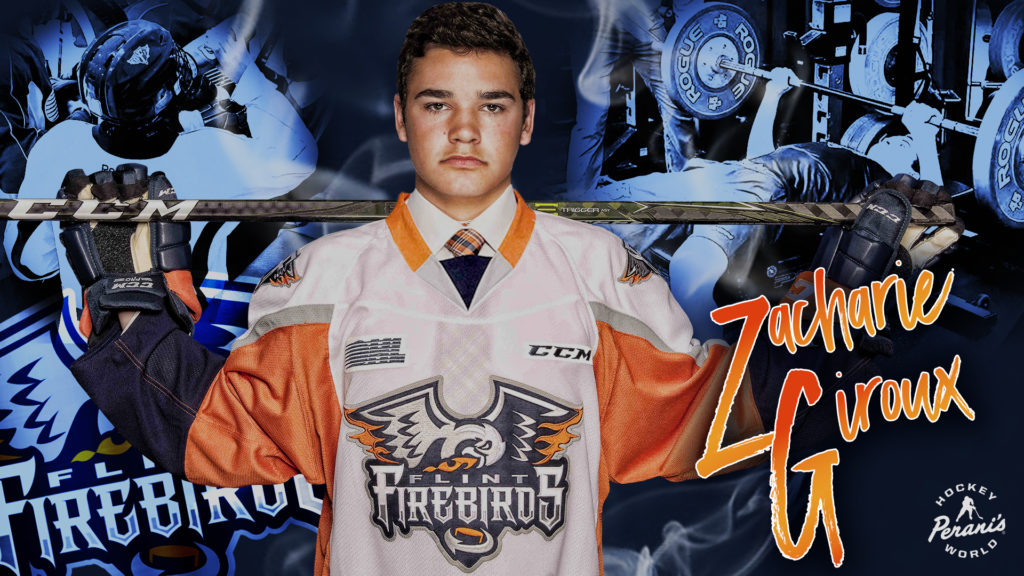 “We are happy to announce that Zacharie and his family have committed to the Flint Firebirds,” said Flint Firebirds Vice President of Hockey Operations & General Manager Barclay Branch. “Zacharie is a highly skilled player that possesses a strong work ethic and high compete level. He will be a key contributor to our hockey club moving forward.”

Giroux, a native of Sudbury, Ont., was selected by the Firebirds in the third round (57th overall) of the 2019 OHL Priority Selection. Giroux was the captain of the Sudbury Wolves AAA hockey team in the Great North Midget League (GNML) last season. He led his team in scoring, averaging a goal-per-game and more than two points-per-game, en-route to recording 55 points (28G, 27A) in just 24 games.

“It’s been a dream of mine since I was a little guy watching the Sudbury Wolves in my hometown every Friday night,” said Giroux. “It’s been an unbelievable experience in Flint so far, the staff is great, there’s a great group of guys there that are not afraid to give you direction and help you succeed.”

The 5-foot-5, 135-pound centerman was awarded the 2018-19 GNML Most Gentlemanly Player. He notched 10 points (7G, 3A) in seven playoff games with the Sudbury Nickel Capital Wolves AAA hockey team also in the GNML. At the 2019 OHL Cup, Giroux earned a point-per-game (1G, 2A) in three contests with Team Northern Ontario Hockey Association.

“Honestly, everything has been a great experience. The equipment and training staff is unbelievable. Whenever anything is wrong with your equipment, it was dealt with in 30 seconds. The fan base is incredible there, coming off the bus at camp or out of the dressing room, there’s always a large crowd to cheer you on. It’s just a great feeling overall.”

This season, Giroux will split time between Flint and the Rayside-Balfour Canadians who are part of the Northern Ontario Junior Hockey League (NOJHL). Giroux will wear number 77 for the Firebirds.