Zacharie Giroux the Hero as Flint comes back to win 3-2. 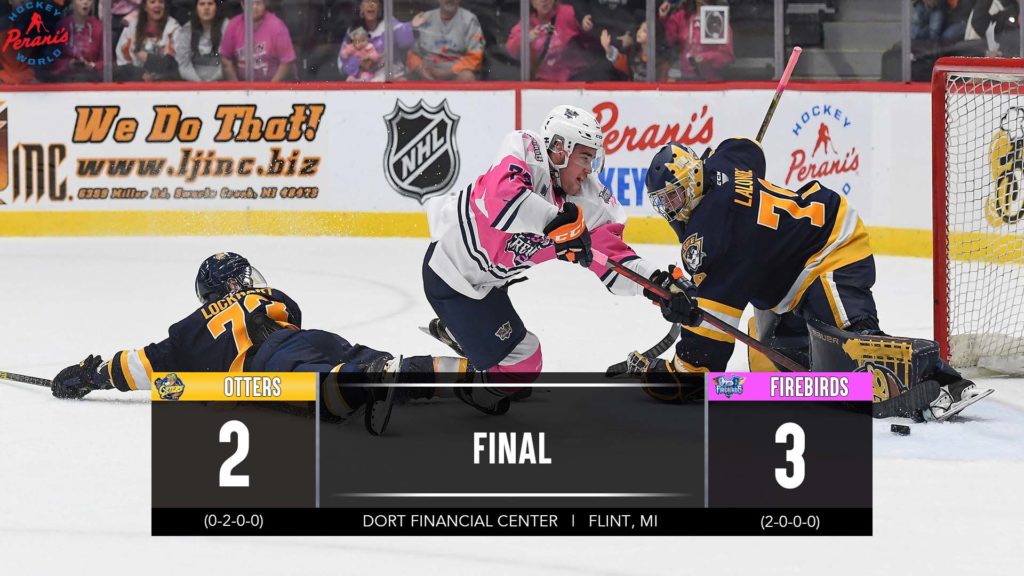 Flint, Mich. — The Firebirds earned their second victory of the 2021-22 season with a 3-2 comeback win over the Erie Otters Thursday night at Dort Financial Center. Tyler Deline scored his first goal of the season, and would later add an assist on his way to earning the game’s second-star award. Brennan Othmann (New York Rangers) and Zacharie Giroux would also get on the scoresheet with Giroux earning first star honors for his game-winning shorthanded goal. The Firebirds move to 2-0 and now both game-winning goals this season have come shorthanded. The Firebirds went 1/2 on the power-play, while Erie went 2/4 with the man-advantage. Luke Cavalin made 37 saves, including 20 in the first period.

The teams went scoreless through the first 20 minutes of play. However, Erie was the better of the two teams in the first frame. The Otters amassed a 9-1 shot advantage through the first 7:33 of play, bombarding Firebirds netminder Luke Cavallin, who would finish the period stopping all 20 Erie shots. The Otters had the only power-play of the period when Flint defenseman James Petrovski was called for cross-checking with just under 10 minutes to play in the first period. Flint forward Brennan Othmann had the best chance for either team on Erie’s power-play when he blocked an Erie shot and burst down the center of the ice on a breakaway. Othmann’s effort was saved by Erie goaltender Nolan LaLonde, who saved all four Firebirds shots in the first frame.

At 4:43 in the second period, the Firebirds scored the game’s opening goal when Tyler Deline got his first goal of the season. Firebirds forward Tag Bertuzzi brought the puck in the Otters zone, and after Erie failed to clear the puck, it found its way to Deline just inside the offensive zone. His low-rising slapshot from the point beat LaLonde glove-side, between the glove and the left pad, giving the Firebirds the 1-0 lead. Tag Bertuzzi and Ethan Hay were credited with the assists.

The Otters would strike back 1:38 later with Brendan Hoffmann scoring on the Otters second power-play of the game. After Flint’s Gavin Hayes was sent off for boarding, the Otters won the ensuing faceoff and immediately funneled the puck towards the net. Christian Kyrou’s shot from the point was tipped down by Hoffmann in the slot. Cavallin was able to make the initial save, but Hoffmann put the rebound away with a backhand shot that never left the surface of the ice and went past Cavallin’s outstretched right pad and in the back of the net with 15:17 left in the second frame.

Erie would take a 2-1 lead with 1:39 left in the second period when Colby Saganiuk scored his first goal of the season on the Otters third power-play of the game. After an initial shot from the point was blocked, Erie continued to swipe at the puck in front of Cavalin. The puck found its way into the slot where Saganiuk was wide open. Saganiuk’s wrist-shot went top-shelf past Cavalin’s glove and in. Assists were given to Connor Lockhart (Vancouver Canucks) and Daniel D’Amato. Second-period shots were 9-7 in favor of the Otters.

The Firebirds would tie the game with 5:52 left in regulation with a Brennan Othmann power-play goal. After winning an offensive zone faceoff, the Firebirds were able to set up the first power-play unit. The Firebirds worked the puck around the point and it ultimately found Othmann who was left all alone on the faceoff circle to the left of LaLonde. His one-timer snuck past LaLonde high glove-side and into the net, tying the game 2-2. Assists on the goal were credited to Tyler Deline and Amadeus Lombardi.

With one minute left in regulation, Flint would reclaim the lead with Zacharie Giroux’s short-handed goal. After the Firebirds were called for too many men on the ice, Otters head coach Chris Hartsburg called a timeout with 1:56 left in the final frame. After the Firebirds had weathered the initial flurry of Erie shots, Giroux was able to corral the puck near the blue line in his own zone and burst forward down the boards. Giroux was able to fend off Erie’s Connor Lockhart, who was going to be called for a penalty on the play. Giroux was then one-on-one with LaLonde and faked the forehand shot and snuck a backhand past LaLonde’s left pad to make it 3-2.

With just under a minute left to play, Erie would call LaLonde to the bench for the extra attacker. Erie was able to get a few shots on net, but Flint forward Ethan Hay’s shot block with 10 seconds left would secure the 3-2 victory for the Firebirds. Final shots on goal were 39-29 in favor of Erie.

Up Next: The Firebirds once again return home next Wednesday night, October 20th, at 7:00 PM. The I-75 Divide rivalry, presented by Coors Light, is back in full force as the Firebirds and Saginaw Spirit meet for the first time this year in the regular season. It’s Dort Financial Member Night. All members are eligible to receive up to four tickets with their member number at the Dort Financial Center Box Office or on Etix.