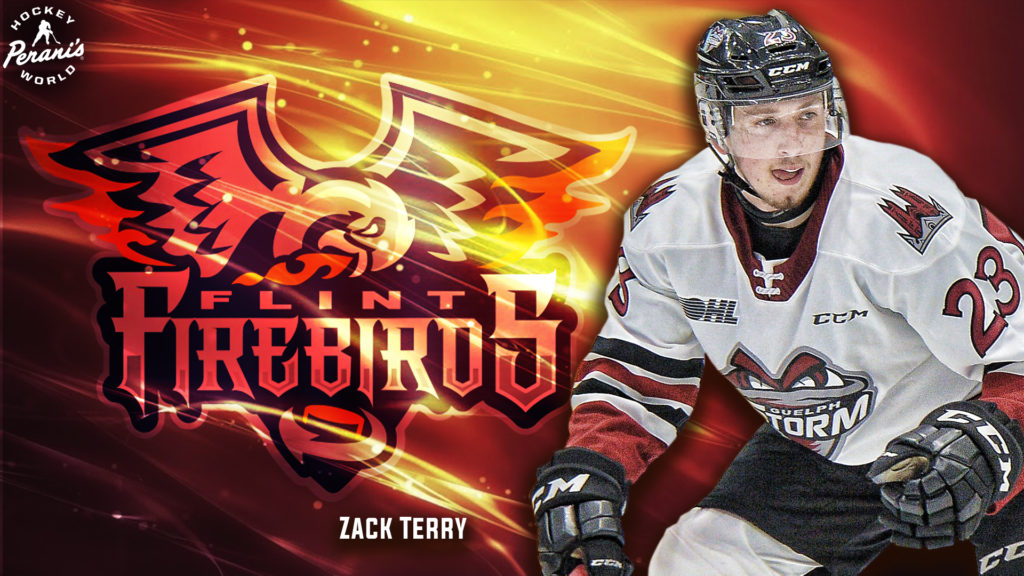 Flint, Mich. – The Flint Firebirds announced today that club has completed a trade with the Guelph Storm.

“We’d like to welcome Zack to the Flint Firebirds Hockey Club,” said Flint Firebirds Vice President of Hockey Operations and General Manager Barclay Branch. “Zack is a high ceiling player that has a lot of potential to grow in this league. Zack is both an impressive player and person and he will help solidify our 2002-born age group and has all the characteristics to be a successful player in this league.”

Terry, a native of Oakville, Ont., was Guelph’s second-round pick (36th overall) in the 2018 OHL Priority Selection. The 6-foot-2, 190-pound defenseman was a member of the 2018-19 Storm roster, capturing the Wayne Gretzky Trophy as the OHL’s Western Conference playoff champions and the J. Ross Robertson Cup as the OHL Finals playoff champions. He’s recorded 12 points (2G, 10A), including 16 penalty minutes and a plus-2 rating in 100 career OHL games.

“I think it’s really exciting to be moving to Flint,” said Terry. “The last couple of years personally didn’t go as I hoped but things are trending in the right direction in Flint and I’m looking forward to being part of it and starting the next chapter of my career. I’ve heard nothing but good things about the organization and the city. Our team went on a visit there when I was playing AAA hockey for Oakville and they were nothing but professional. I was impressed with the things I saw during my time there.”

In his first campaign in the OHL, Terry was recognized as one of the top Canadian-born defensemen, earning a spot on Hockey Canada’s roster for the World Under-17 Hockey Challenge. He was also recognized in the classroom, earning the OHL’s Ivan Tennant Memorial Award, which is awarded to the top academic high school player in the league each year.

Prior to his OHL career, Terry competed for the Oakville Rangers Minor Midget AAA Hockey Club in the Ontario Minor Hockey Association-South Central Triple-A League. He led the OMHA-SCTA in scoring among defenseman and finished ninth among all players with 43 points (15G, 28A) in just 35 games with the Rangers.

Terry will wear number-44 for the Firebirds.