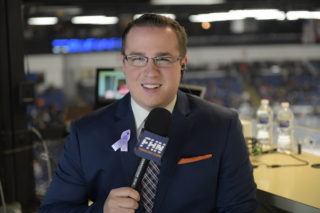 Dominic Hennig (@DominicHennig) will enter his 13th season behind the microphone in hockey and sixth in the OHL prior to the 2020-21 season, having been named the Firebirds’ Director of Broadcasting and Communications on May 14, 2015.

During his tenure at Ferris State, Hennig broadcasted two conference regular season titles in both the Central Collegiate Hockey Association (CCHA) and the Western Collegiate Hockey Association (WCHA). Hennig called Ferris State’s run to the NCAA National Championship game in 2012, giving him the opportunity to announce the pinnacle of NCAA Division I college hockey at the age of 20.

Firebirds team president, Costa Papista, states: “We are very excited to have Dominic join our hockey and front office team prior to our inaugural OHL season. He has impressive credentials and a tremendous amount of passion and enthusiasm for our community minded hockey project here in Flint and Genesee County.”

In addition to broadcasting for the Firebirds, Hennig can frequently be heard internationally as a correspondent on SiriusXM Radio’s NHL Network and was also the host and founder of “The Breakaway,” a weekly call-in hockey talk radio show throughout West Michigan.

He is also currently the host of the “Inside Sports Medicine” radio show, held Sunday morning’s from 8-9 a.m. throughout the Metro-Detroit area on 97.1 FM “The Ticket” WXYT. 97.1 FM is Detroit’s only FM sports radio station and flagship play-by-play station of the Detroit Pistons, Red Wings, Tigers and University of Michigan Football.

Hennig played an integral role in the strategic marketing of Bulldog Hockey and Ferris State Athletics. He was a key member of a team that increased attendance for six consecutive seasons, leading to the expansion of the “Dawg Pound” student section after a 150% surge in season ticket sales in three years. Hennig developed a social media presence for Ferris State that has been consistently presented as a model by the NCAA, who deemed Hennig as an innovator of sports multimedia and video content.

Hennig is a native of Macomb, Mich., and a graduate of Ferris State University. He holds a bachelor’s degree in business and public relations along with a minor in sports communications. Currently, Hennig is working towards obtaining a master’s of business administration (MBA) degree. Hennig is also the owner of Hennig Solutions, an audio, video, home WiFi, internet and security company serving the Metro Detroit & Flint, Michigan areas.

Recognized as a leader in television coverage, the OHL is the only hockey league outside the NHL that has its own live television subscription package. OHL fans in Ontario have the opportunity to add the “OHL Action Pak” to their television subscription to watch almost every OHL game on TV, home and away, throughout the season, similar to the NHL Center Ice and MLB Extra Innings TV packages. During the most recent season, 65 of the 68 Flint Firebirds games had live television coverage province-wide throughout Ontario.