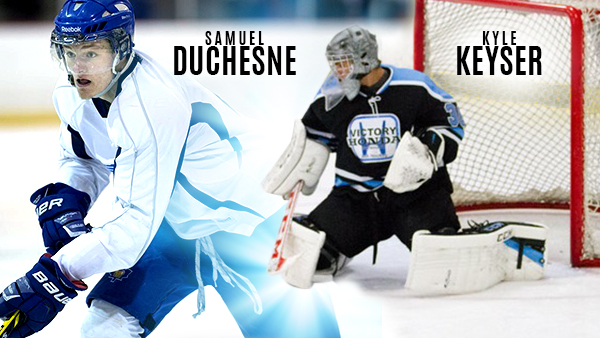 Duchesne, a fourth round pick (64th overall) in the 2015 OHL Priority Selection and a native of Brampton, Ont., recorded 32 points while adding 4 goals in 73 games as a member of the Toronto Marlboros Midget Minor AAA team in the 2014-15 season. In addition, Duchesne played an intricate role for the Marlboro’s, capturing championships at both the 2015 GTHL Playoffs and the OHL Cup. He was also on the blue line for GTHL Blue when the team secured the 2015 OHL Gold Cup, a tournament created to feature Ontario’s top Under-16 talent each May.

“Samuel brings a high level of talent, character and work ethic to our club. He comes from a winning environment and a family that has produced top players for the OHL,” said Christensen. “We feel very fortunate to get Samuel in our line up and believe that he will have a significant impact on our success over the next few years.”

Keyser, a native of Coral Springs, Fla., was also chosen by the Firebirds in the fourth round (74th overall) and spent the 2014-15 regular season with the Victory Honda Midget Minor AAA Hockey Club in Michigan. Through 19 regular season games, Keyser picked up 14 wins and recorded 2 shutouts. In addition, he recorded a goals against average (GAA) of 2.27 and a save percentage (SV%) of .916.

“He’s a great athlete. That was one of the most important factors in drafting him. Along with good size, he moves well in the net and has been a top performer in his age class for years,” Christensen said. “This year, he lead his team to the national tournament in Buffalo, so he’s a player that showed the ability not only to play in big games but also to win in big games.”

Keyser will join current Firebirds goaltenders Zack Bowman, Tyler Johnson and Alex Nedeljkovic. Nedeljkovic, a second-round pick of the Carolina Hurricanes in the 2014 NHL Draft, has spent the past three seasons as the starting goaltender in Plymouth and signed an entry-level contract with the Hurricanes on March 27.

“Kyle is a great puck handling goaltender that has great reflexes and covers a lot of the net. The big advantage that he will provide our team is that he knows how to move the puck out of the trouble areas for our defenseman,” added Joe Stefan, assistant general manager.”

Both Samuel and Kyle will report to Flint and Genesee County for main camp on August 31st.

Firebirds season tickets for the 2015-16 inaugural season are currently on sale and can be purchased at the Perani Arena & Event Center. More information on season tickets can be found at FlintFirebirds.com or by calling the Firebirds box office at (810) 744-0580.