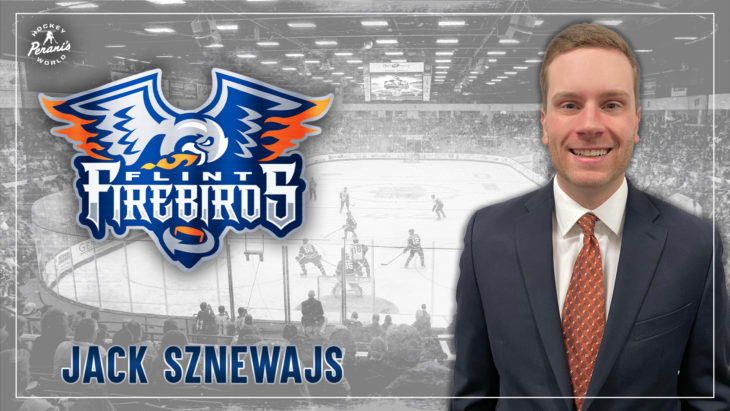 Jack Sznewajs (@JackSznewajs) will enter his first full season with the Flint Firebirds, having been named the Director of Broadcasting and Communications on May 11, 2021.

“It’s an absolute honor to work for the Firebirds,” said Sznewajs. “I grew up attending games in Plymouth when the team was the Whalers so being apart of the franchise’s continued success in Flint now is special. I want to thank Jeremy (Torrey) for this tremendous opportunity and look forward to getting started and preparing for the upcoming season.”

Prior to Flint, Sznewajs worked for Big Ten Network and Michigan State athletics, exclusively with the hockey team. He called over 150 NCAA Division 1 games for BTN Student U across seven different sports, including an MSU regular season basketball team when the Spartans were the #2 ranked team in the country. Two of his calls from the game, both dunks from future NBA lottery pick Miles Bridges, were the #1 Play on Sportscenter’s Top 10. With a focus on hockey, Sznewajs broadcasted games for current NHL players Mason Appleton, Taro Hirose, Quinn Hughes, Cole Caufield, Alex Turcotte and Josh Norris. Also at Michigan State, Sznewajs was a two-time Michigan Association of Broadcasters (MAB) award winner for his work in college television. Other notable work during his time as MSU was broadcasting the Spartan men’s soccer teams run to the Final Four in 2018.

Prior to MSU, Sznewajs graduated from the University of Detroit Jesuit high school in 2015. While at U of D, he worked closely with the broadcast club, including being club president his junior and senior year. During his time, he broadcasted over 200 games across six different sports for U of D, the MHSAA, Fox Sports Detroit Prep Zone and the NFHS Network. He covered two Final Fours for U of D in basketball, both led by former Spartan Cassius Winston, two Frozen Fours in hockey, led by former Spartan hockey captain Tommy Apap, and a state title for the schools bowling team. He also got to broadcast games in some of Michigan’s most famous arenas, including Compuware Ice Arena (USNTDP), Munn Ice Arena (MSU), Joe Louis Arena (former home of the Detroit Red Wings), Yost Ice Arena (Michigan) and the Calumet Colosseum, which is the oldest active ice arena in North America located in the Upper Peninsula.

Sznewajs is a native of Bloomfield Hills, Mich., and graduated from Michigan State University in 2019 with a bachelor’s degree in journalism. He is a born-and-raised Spartan with both of his parents, David and Katie, graduating from MSU in 1988. He is the second of four boys, all who grew up in-and-around the game of hockey.

Recognized as a leader in television coverage, the OHL is the only hockey league outside the NHL that has its own live television subscription package. OHL fans in Ontario have the opportunity to add the “OHL Action Pak” to their television subscription to watch almost every OHL game on TV, home and away, throughout the season, similar to the NHL Center Ice and MLB Extra Innings TV packages. During the most recent season, 65 of the 68 Flint Firebirds games had live television coverage province-wide throughout Ontario.