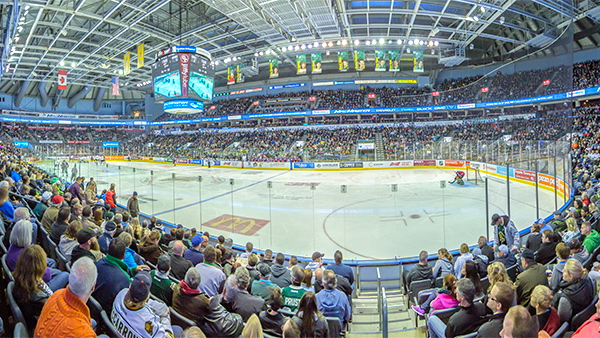 The Flint Firebirds (14-18-2-2, 5th West Division) square off against the London Knights (27-6-2-1, 2nd Midwest Division) on Friday night in a game that will be televised live on Sportsnet throughout Canada and re-aired nationwide in the United States on Saturday at 1 p.m. (EST). Puck drop is set for 7 p.m. in the first meeting between the two teams at the Budweiser Gardens (capacity: 9,090) in London, Ont.

The Firebirds will return home to the Dort Federal Event Center Saturday night against the Niagara IceDogs with puck drop slated for 7:30 p.m. All Flint Firebirds home games in the month of January are “Food Drive” games where fans can bring in five canned or boxed food items and receive $5 off a silver ticket.

Radio & TV Coverage
Fans unable to attend Friday’s game can listen live in Flint and Mid-Michigan on 1330 AM WTRX Sports Radio and around the world online on the iHeartRadio app. Dominic Hennig will call the play-by-play action on the Flint Firebirds Hockey Radio Network. Pregame coverage will begin 30 minutes prior to puck drop at 6:30 p.m.

OHL fans with cable television in Ontario can add the OHL Action Pak to their television plan to catch the Firebirds in action, home or away all season long. Along with Saturday’s game against the IceDogs, 64 of the Firebirds’ 68 games throughout the 2015-16 season are also scheduled to be televised live across the province of Ontario on the OHL Action Pack.

All Flint Firebirds home and away games throughout the 2015-16 season can be watched anywhere in the world online on OHL Live and on the OHL Live App. OHL Live is a league video streaming platform that delivers high quality live and on-demand coverage of all regular season and playoff games annually. The cost is $6.99 per game, $69.99 for Flint Firebirds away games only, $179.99 for all 68 home and away Firebirds games and $279.99 for all 1,360 OHL games throughout the 2015-16 season.

Detroit Red Wings’ draft pick Vili Saarijärvi is expected to play Friday night after earning a Gold Medal with Finland in the World Junior Championships on Tuesday night. In seven games of the WJC, Saarijärvi earned four assists, two penalty minutes and tallied 11 shots on goal for Finland. Saarijärvi was 11th in points among all defenseman in the OHL before leaving for the WJC and missing eight Firebirds’ games. In his first season in the Ontario Hockey League, Saarijärvi has appeared in 28 games for the Flint Firebirds recording five goals and 14 assists for 19 points.

Will Bitten is 20th overall in OHL scoring and leads the Firebirds with 19 goals and 23 assists, totaling 42 points in 35 games played this season. Bitten has earned multi-point nights 11 times this season.

After being acquired in a trade with Windsor on Sunday, Luke Kirwan is expected to make his debut in a Firebirds’ uniform on Friday night. Kirwan recorded 29 goals and 28 assists for a total of 57 points with the U.S. National U17 Team in the 2014-15 campaign. Last season, Kirwan scored seven goals with the Spitfires and tallied 12 assists, totaling 19 points in 59 games.

There are three players on the Flint Firebirds roster that are drafted in the National Hockey League. Firebirds’ captain Alex Peters and goaltender Brent Moran were both selected by the Dallas Stars in the 2014 NHL Draft. Most recently, Vili Saarijärvi was drafted by the Detroit Red Wings this past June in the 2015 NHL Draft.

In addition, Will Bitten, Nicholas Caamano, Jacob Collins, Matyáš Kantner, Dane Johnstone and Håkon Nilsen are eligible to be selected in the 2016 NHL Draft in Buffalo in June.

Four London skaters that competed in the World Junior Championship in Helsinki are expected to return to the lineup for the Knights on Friday night. London’s defenseman Olli Juolevi earned a Gold Medal alongside Flint’s Saarijärvi after breaking the record for most points by a 17 year old defenseman with 9 points in the tournament. Christian Dvorak and Matthew Tkachuk represented Team USA while Mitch Marner was the lone Knight on the Team Canada roster.

Despite missing seven games and approximately four weeks, London’s Dvorak, Tkachuck and Marner are three of the OHL’s four leading point scorers. Dvorak leads the OHL with 28 goals, 37 assists and 65 points in 27 games played. Tkachuck is third with 59 points in 29 games and Marner follows with 58 points in 25 contests this season.

Marner was the fourth pick overall in the 2015 NHL draft after being selected by the Toronto Maple Leafs in the first round. Dvorak was tabbed in the second round of the 2014 NHL Draft by the Arizona Coyotes, while Tkachuck is a top prospect that is eligible for the 2016 NHL Draft in June.

In net, the London Knights are backstopped by Tyler Parsons who is the OHL’s fourth-best goaltender with a 2.38 goals against average and a .917 save percentage. However, Parsons was injured in the pre-game warm-up in Kitchener on Tusday, December 29th. The Knights are backed-up by Brendan Burke (Arizona ’13) who holds a 3.24 GAA and a .895 SAV% including a 4-2-0-0 record in 8 games this season.

The Flint Firebirds power play ranks 19th out of 20 teams in the OHL converting at a 14.1% success-rate scoring 21 goals on 149 opportunities. On the penalty kill, the Firebirds are currently 17th in the OHL, operating at 77.2%. Flint has scored two shorthanded goals and has successfully killed 112 of 145 penalties this season. The Firebirds are recording the 12th least penalty minutes in the OHL with an average of 12.5 per game.

London has the OHL’s best power play, scoring 32% of the time and is 8th on the penalty kill at 81.8%. The Knights have registered the fourth most penalty minutes in the OHL averaging 14.6 minutes in the box per game.

The Firebirds will return home to the Dort Federal Event Center Saturday night against the Niagara IceDogs with puck drop slated for 7:30 p.m. All Flint Firebirds home games in the month of January are “Food Drive” games where fans can bring in five canned or boxed food items and receive $5 off a silver ticket.

The World Junior Championship (WJC) is a tournament held every year showcasing the 10 best national under-20 nations in the world from the end of December to the beginning of January.

In seven games of the WJC, Saarijärvi earned four assists, two penalty minutes and tallied 11 shots on goal for Finland.

Group Ticket Packages
Whether you’re entertaining corporate clients, celebrating a special occasion, having a fun night out with the family and friends or rewarding employees…we have a fun, easy and affordable plan for you. It’s more than a ticket, it’s an experience! Contact Shane Stout to book your group outing today: (810) 742-2004 or via email at shane@flintfirebirds.com.

Flint Firebirds Hockey Radio Coach’s Show
Join the Voice of the Firebirds Dominic Hennig and Head Coach John Gruden from 6-7 p.m. every Tuesday night on 1330 WTRX Sports Radio and around the world online on the iHeartRadio App here. Hennig and Gruden recap the previous week of events, preview the upcoming games on the ice and take your phone calls, emails and tweets! Tune in each Tuesday from 6-7 p.m. on 1330 AM WTRX Sports Radio.