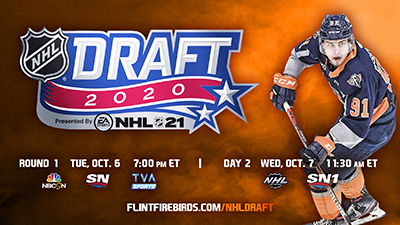 For the fifth consecutive year, at least one current Flint Firebird player is expecting to hear their name called on NHL Draft day. Flint’s Evgeniy Oksentyuk (#109) and Riley Piercey (#129) are among the players identified by NHL Central Scouting in their Final Rankings for the 2020 NHL Draft. Additionally, after placing among the top five defenseman in the Ontario Hockey League with 62 points this past season, Riley McCourt may become the first Firebird to hear his name called two seasons after his initial draft year (2018).

Sportsnet’s Sam Cosentino believes the OHL will be well-represented in the first round. A total of nine OHL players are included in his top-31, with Sudbury Wolves centerman Quinton Byfield leading the way at number three. Ottawa’s Marco Rossi, Erie’s Jamie Drysdale, Saginaw’s Cole Perfetti and Ottawa’s Jack Quinn are also included inside the top-10.

Oksentyuk was selected by the Firebirds in the first-round (5th overall) of the 2019 CHL Import Draft. He recorded the most points out of all 81 players taken in the 2019 CHL Import Draft. Oksentyuk also led the Firebirds with 78 points (33G, 45A) in 58 games this past season. The Brest, Belarus native set a franchise record for the longest point-streak by a single player, recording a point in 17 consecutive games from Nov. 15, 2019 – Jan. 17, 2020. 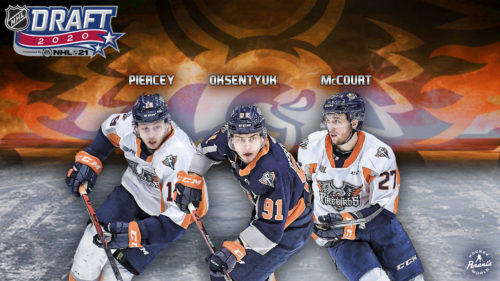 Forward Riley Piercey was acquired in a trade with the Barrie Colts on Jan. 7, 2020. Prior to coming to Flint, Piercey recorded 13 points (9G, 4A) in 35 games and then added another 21 points (8G, 13A) in eight less games with the Firebirds. The Mississauga, Ont. native finished his NHL Draft season with 34 points (17G, 17A) in 62 games this campaign.

The Firebirds have had seven players selected through the past four NHL Drafts. Last June, Vladislav Kolyachonok (Florida Panthers) and Ethan Keppen (Vancouver Canucks) were tabbed in the 2019 NHL Draft. 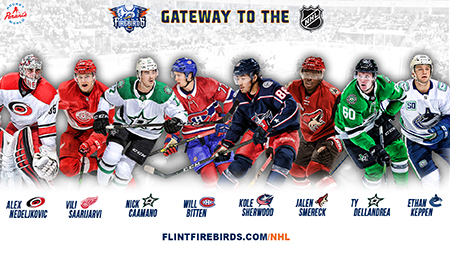 In 2018, Ty Dellandrea became the first Flint Firebird to be selected in the first round of an NHL Draft when he was picked 13th-overall by the Dallas Stars. Dennis Busby was also selected that year in the fifth-round (145th overall) by the Arizona Coyotes.

Flint’s best showing at an individual NHL Draft is two players selected, which has happened in three of the four NHL Drafts since the Firebirds have been a member in the OHL. Flint has the opportunity to set a franchise record this weekend if three or more Firebirds hear their name called.

Since 1969, a total of 2,379 OHL players have been selected in the NHL Draft representing over 20% of all players chosen by clubs and a figure higher than any other league solidifying the OHL as the number one supplier of NHL talent.

Stay tuned to www.FlintFirebirds.com/NHLDraft for all-access coverage of the Firebirds at the 2020 NHL Draft.