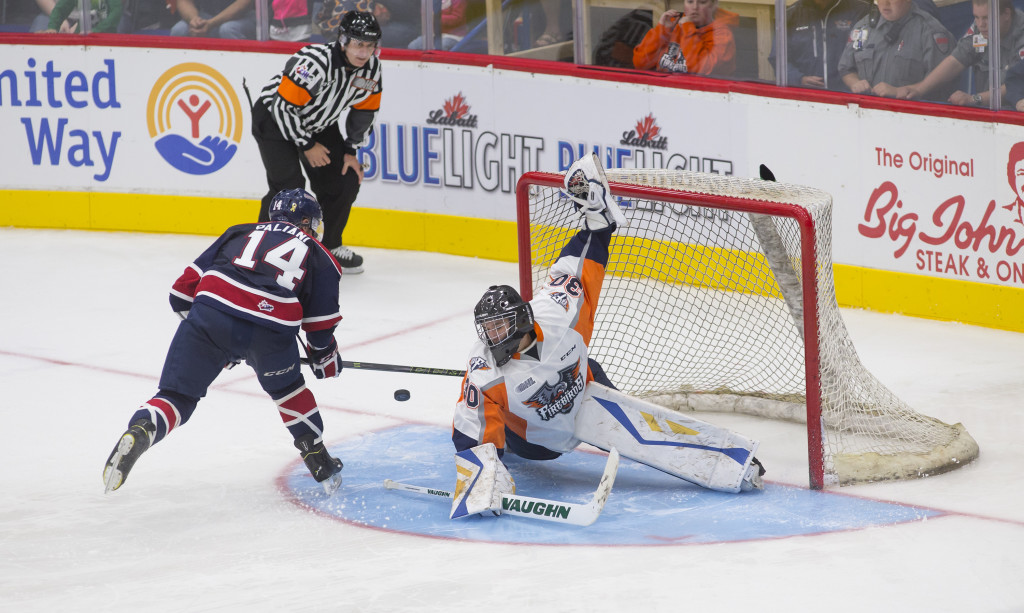 Toronto, ON – The Ontario Hockey League today announced that goaltender Zack Bowman of the Flint Firebirds is the first Pioneer Energy OHL Player of the Week for the 2015-16 regular season after posting a 2-0-0-0 record including one shutout with a goals-against-average of 0.96 and a save percentage of .966.

Bowman made 58 saves in two games earning first star honours in both contests for the Firebirds who opened their inaugural season with a pair of victories over Michigan I-75 rivals the Saginaw Spirit.  In Thursday night’s season opener, Bowman stopped all 24 shots he faced on the road earning his first career OHL shutout blanking the Spirit 3-0.  In Saturday night’s home opener, Bowman turned aside 34 shots then stopped all three Spirit shootout attempts backstopping the Firebirds to a 3-2 victory in the first ever OHL game played at the Dort Federal Event Center.

Bowman, an 18-year-old from St. Catharines, ON, is playing in his third career OHL season after being selected by the Plymouth Whalers in the fourth round of the 2013 OHL Priority Selection.  In 34 career games he carries a 7-15-0-0 record with a goals-against-average of 4.30 and save percentage of .883.

Watch video highlights of Bowman and the Firebirds against the Spirit on Thursday and Saturday nights.

Honourable mention for the award this week goes to 2016 NHL Draft prospect Matthew Tkachuk of the London Knights who led the league with six points in his first two career OHL games scoring twice with four assists.  Tkachuk’s week also included a three-point performance on Thursday night in Buffalo competing for Team Roenick at the CCM/USA Hockey All-American Prospects Game.  Also considered for the award was Stephen Harper of the Hamilton Bulldogs and Calgary Flames prospect Andrew Mangiapane of the Barrie Colts who both scored three goals with two assists for five points in two games.