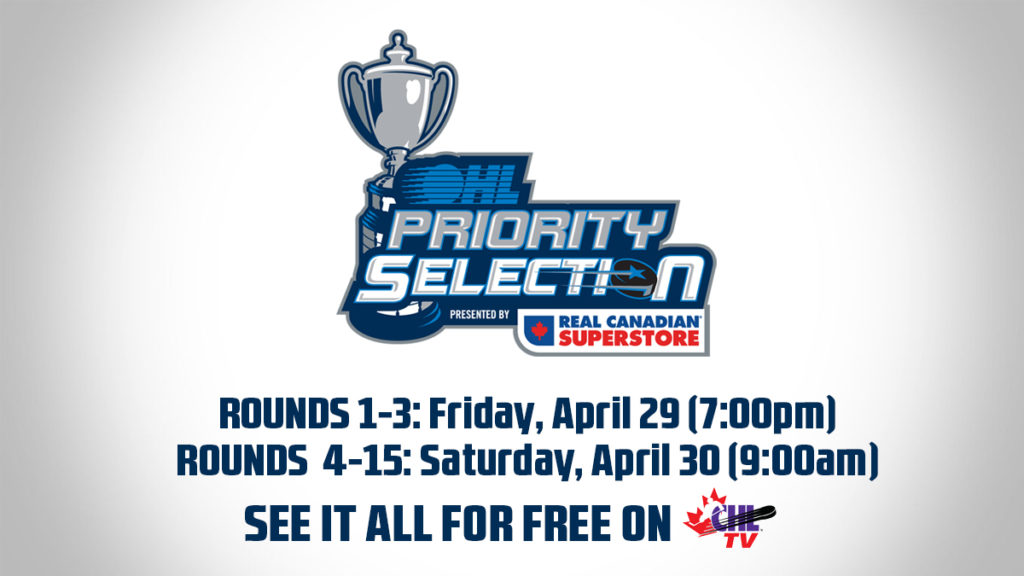 The Flint Firebirds finished the 2021-22 season as their winningest season in franchise history, recording the most points in a season (89), most wins (42), most road wins (24) and most goals for (286). The Firebirds are slated to pick #18 overall in this year’s draft.

The OHL conducts the annual Priority Selection during the first round of the OHL playoffs by way of the Internet to allow eligible players and their families, as well as fans across the league, to follow the draft in real-time online.

North American players that resided in the province of Ontario, the states of Michigan, Pennsylvania, and New York, and other designated U.S. states east of the Mississippi River born in 2006, were eligible for selection through the 15-round process this year. 2007-born Michael Misa received exceptional status by Hockey Canada and will be available as a 15-year-old joining the likes of Sean Day, Shane Wright, Aaron Ekblad, John Tavares and Connor McDavid.

Fans are encouraged to continue the conversation on social media throughout the draft weekend using #OHLDraft.

About The Flint Firebirds:
The Flint Firebirds are a proud member of the prestigious 20-team Ontario Hockey League. The OHL is one of three leagues that constitute the 60-team Canadian Hockey League (CHL), which is known as the world’s premiere player development league for the NHL. On NHL opening day rosters in October, 70% of NHL players were CHL alums. Since the Firebirds’ inception in Flint, Michigan five seasons ago, the team has produced 22 NHL signed or drafted players. More than 250 scouts representing all 31 NHL clubs attended a Firebirds game in Flint during the 2021-22 season. The Firebirds average nearly 3,000 fans per game at the newly renovated Dort Financial Center, reaching over 100,000 fans each OHL season.