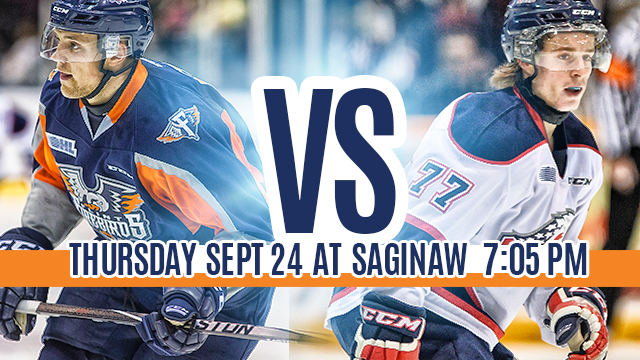 Puck drop is set for 7:05 p.m. at the Dow Event Center and a limited amount of tickets remain starting at $15 for upper level seating, $17 for lower level and $19 for executive level. Tickets can be purchased online at ticketmaster.com or by calling the Saginaw Spirit Box Office at (989) 497-7747.

As part of Saginaw’s home opening festivities, the Coors Light I-75 Divide Cup Fan Fest will be held at the First Merit Bank Event Park at 5:00pm. Fans with a ticket to the game are permitted to attend this pregame festival in which they can enjoy a complementary hamburger and Frito-Lay product, live music from Mandi Layne & the Lost Highway, and the unveiling of the Coors Light I-75 Divide Cup Trophy. The trophy will be awarded at the end of each regular season to the winner of the season series. In the event of the tie, the first tiebreaker for the trophy will be goal differential in the games played between Saginaw and Flint.

Fans unable to attend tonight’s game can listen live on 1330 WTRX Sports Radio and around the world online on the iHeartRadio App here. Radio pregame coverage begins at 6:30 p.m. Fans living in Ontario can watch the game province-wide on Rogers TV channel 461 and online on OHL Live here.

Standing room only tickets to the Flint Firebirds inaugural opening night game vs. the Saginaw Spirit this Saturday are available by visiting the Dort Federal Event Center Box Office, ticketmaster.com or by calling (810) 744-0580. Great season seat locations, which include opening night, are still available by calling the box office or e-mailing Susana Wight at susana@flintfirebirds.com.