“We are thrilled that Braeden and his family have committed to the Flint Firebirds organization,” said Flint Firebirds Vice President of Hockey Operations and General Manager Barclay Branch. “Braeden is a highly skilled offensive skater that will play a significant role with our club moving forward.”

Kressler, a native of Kitchener, Ont., played his youth hockey for the Mississauga Senators AAA hockey team in the Greater Toronto Hockey League (GTHL). A five-foot-nine, 155-pound center, Kressler led the Senators with 62 points (27G, 35A) in 56 games and was voted Most Valuable Player (MVP) by his teammates. He also notched two goals in just three Tier-II ‘Junior A’ games with the Burlington Cougars in the Ontario Junior Hockey League (OJHL). At the OHL Cup in March, Kressler tallied five points (4G, 1A) including one game-winning-goal in three games. He also finished second-overall in both the on-ice and off-ice testing at the 2019 OHL Combine.

“It’s more than exciting to be part of this organization,” said Kressler. “I’ve heard so much about Eric [Wellwood] and the rest of the staff and couldn’t be more excited to learn and develop in Flint to get to the next level.”

At the OHL Gold Cup in May, Kressler finished fifth in points (2G, 3A) among more than 130 players, helping his team to a perfect 4-0-0-0 record. Kressler scored the tying goal in the final period en-route to capturing the prestigious OHL Gold Cup title. 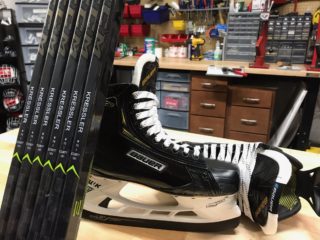 “I’ve learned the Firebirds organization was the best fit for me of every place that I’ve been to around the league. I was in shock at orientation camp how professional the facilities were and how much community support the Firebirds have,” added Kressler.

HockeyProspect.com Scouting Report: Braeden plays a big, complete game despite the fact he has a smaller stature than most of his opponents showcasing his highly competitive spirit. Utilizing quick feet he is able to consistently make plays in a variety of ways whether on defense or offense. His smooth hands and offensive instincts are what stands out most about his game as Braeden can control a game with the puck on his stick, skating through the neutral zone and weaving around defenders or quarterbacking the power play from the half boards. He displays great playmaking skills to set up teammates or score on his own and great hands using toe drags or lateral movement to create room and space.

Braeden will arrive in Flint for training camp in late August.