Örnsköldsvik, Sweden – Flint Firebirds’ defenseman Vladislav Kolyachonok has been named captain for the Belarus National Men’s Under-18 Team. Kolyachonok and Team Belarus began their quest for Gold this morning when they faced-off at the 2019 International Ice Hockey Federation (IIHF) U-18 World Championship in Örnsköldsvik and Umeå, Sweden. Kolyachonok scored Belarus’ second goal of the contest in the first game this morning en-route to defeating Czech Republic 4-3. Next up, Belarus will face Finland Friday at 1:30 p.m. (ET). The games will be internationally televised live on the NHL Network in the United States and on TSN throughout Canada.

Team Belarus is in Group A along with Canada, the Czech Republic, Finland and Switzerland while Group B consists of Latvia, Russia, Slovakia, Sweden and the United States. Of note, Belarus will face-off against Canada this Sunday Apr. 21 at 1:30 p.m. (ET). 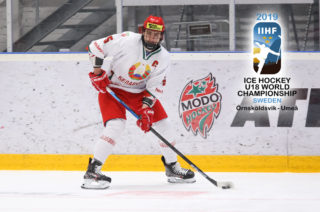 The 6-foot-2, 188-pound defenseman comes to Flint from the capital city, Minsk, Belarus. He was tabbed as the Flint’s ‘Best Defenseman’ at the end-of-year Firebirds’ player awards banquet. Kolyachonok finished second among all rookie defenseman in the OHL this season with 30 points (4G, 26A) in 54 games. Kolyachonok’s 30 points in his first full season set a record for most points by a rookie in a Firebirds’ uniform. He has been ranked as number-31 among North American skaters and is one of 48 OHL players that have been listed by NHL Central Scouting in their Final Rankings for the 2019 NHL Draft, which takes place June 21-22 in Vancouver, BC.

The IIHF U-18 World Championship is an annual event organized by the International Ice Hockey Federation (IIHF) for national under-18 ice hockey teams from around the world. The United States has dominated the tournament with 10 championships followed by Finland with four championships, and Canada and Russia with three. Countries generally send their best team to this tournament, however, several top North American and European amateurs may not participate as in April the top American and Canadian (CHL / OHL) junior leagues have not concluded their seasons and thus cannot release their players. Players who do not participate in the World Championship due to their respective league postseasons have the alternative of representing their country in the Hlinka Gretzky Cup Tournament in August. 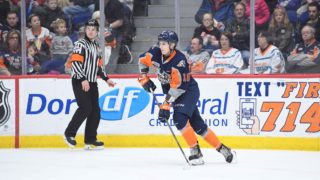 Kolyachonok joins Ty Dellandrea as the two Firebirds to compete in the prestigious event. Dellandrea was named assistant captain of Canada’s National Men’s Under-18 Team for the 2018 IIHF World Championship in Russia last season and recorded five points (2G, 3A) in five games including a plus-five rating before being eliminated in the quarter-finals by Czech Republic on Apr. 26.