Firebirds earn a point in overtime defeat to London Saturday

Flint, Mich. – Despite leading 3-2 after two periods of play, the Firebirds were unable to hang on for the victory Saturday night, falling in overtime 4-3 to the London Knights. Evgeniy Oksentyuk scored a highlight-reel goal that has already seen national television coverage to extend his point-streak to 13 games, Riley McCourt extended his streak to six games and Connor Roberts tallied a two-point night. Anthony Popovich made 37 saves on 41 shots.

Next up for Flint, the Firebirds will face the Saginaw Spirit for a Coors Light I-75 Divide Cup tilt this Wednesday night. Puck drop is set for 7 p.m. (ET) at the Dow Event Center in Saginaw 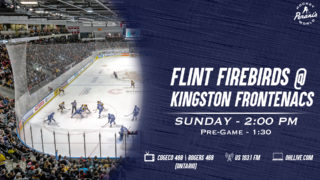 Preview: Firebirds battle the Frontenacs in Kingston Sunday
6 days ago