Mississauga, Ont. – The Firebirds are coming home to Flint riding a 15-game winning streak and are in first place in the Ontario Hockey League’s West Division. The Firebirds skated to their 11th straight road win with a 6 – 3 victory over the Steelheads in front of over 3,300 fans in Mississauga, Ont. Friday night. With the win, Head Coach Eric Wellwood became the winningest coach in Flint history with his 53rd win as the bench-boss, surpassing Ryan Oulahen’s 52.

Jack Wismer lit the lamp twice late in the game, and he was joined by teammates Tyler Tucker (St. Louis Blues), Riley McCourt, Cody Morgan, Ty Dellandrea (Dallas Stars) and Evgeniy Oksentyuk who all logged two points in the contest. Anthony Popovich made 34 saves on 37 shots to pick up his franchise-leading 26th win between the pipes.

For the second time in as many nights, the Firebirds converted on the game’s first power play. Ty Dellandrea sent the point-to-point pass from the right side to Tyler Tucker on the left. Tucker found Riley McCourt in the left circle. McCourt steadied the puck and sniped a wrister from the left faceoff dot that beat netminder Kai Edmonds far-side for his 18th of the season at 6:45.

Tucker netted his 16th of the season on Flint’s third chance with the man-advantage a few minutes later. Evgeniy Oksentyuk slid a backhand pass from the right circle to Tucker centered high between the circles. He wound back and fired through heavy traffic in front of the net, finding twine at 11:07. McCourt combined with Oksentyuk for the assists.

The ‘Birds outshot the Fish 17 – 7 through 20 minutes, but trailed in the faceoff circles 12 – 10. Flint scored two power-play goals on three chances, and stayed out of the penalty box to thwart any need for a penalty-kill in the opening frame. 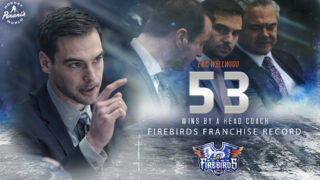 Flint’s third goal came off the stick of a third defenseman in the second period. Emmet Pierce used his 6-foot-6 frame to screen Edmonds, drawing two defenders with him in the process. Marcus Gretz sent a wrist-shot into the traffic that Edmonds wasn’t able to track, and it found twine for his first goal of the season. Oksentyuk and Cody Morgan combined for the helpers on the tally, logged at 10:57 of period two.

The ‘Birds scored another power-play marker late in the middle frame, on yet another shot from a defenseman center high inside the blue line. This time it was Owen Lalonde slapping a heavy shot into traffic and Edmonds made the initial save. The rebound trickled out to the netminders left where Brennan Othmann redirected it home for his 15th of the campaign at 16:52. Lalonde and Morgan were credited with the assists.

The Steelheads found the scoreboard with less than two minutes remaining in the second period during four-on-four play. James Hardie carried over the blue line and between the circles before making a drop-pass back to Duncan Penman. The former Spirit defender made a move around one Flint defender before faking to the right and lifting a backhand shot over Popovich’s outstretched right pad for his eighth of the season and first goal of 2020 at 18:13. Liam Ham was credited with the second assist.

The Firebirds led 4 – 1 after 40 minutes of play. Mississauga outshot Flint 12 – 11 in the middle 20, but still trailed 28 – 19 through two periods. Faceoffs favored the Steelheads 28 – 20. The ‘Birds scored once on three power-play opportunities in the middle stanza, and the Fish came up empty on their only chance.

William Portokalis potted his eighth of the season for the Steelheads at 4:42 of the third to cut the deficit to two. From the bottom of the left circle, he shot far-side off the post and in. Aidan Preuter was credited with the lone helper.

During another stint of four-of-four, Hardie attempted a backhand shot from below the left-wing circle. Popovich kicked the rebound out to his right, but Keean Washkurak was there sneak it behind the Flint netminder with 5:20 remaining in regulation. Thomas Harley (Dallas Stars) combined with Hardie for the helpers.

As the clock wound down near the two-minute mark, Quinn Yule hustled to beat out an icing call and backhanded the puck toward the slot. Jack Phibbs got a stick on it and unselfishly passed back to the trailing Jack Wismer. Wismer made a forehand to backhand move that earned the commitment from the netminder, allowing him to tuck it in from the left side of the cage.

Trailing by two, the Steelheads called Edmonds to the bench for an extra attacker. A turnover deep in Flint’s defensive zone resulted in Ty Dellandrea (Dallas Stars) hitting Wismer with a banked breakout pass of the left-side wall. Wismer had a step on the defense and sealed the victory with his 24th of the season on the empty net.

Next up for the Flint, the Firebirds will travel home Friday night for a Saturday night contest against the Kitchener Rangers in Flint.