“We are very excited to welcome Riley McCourt to the Flint Firebirds’ family,” said Flint Firebirds Vice President of Hockey Operations and General Manager Barclay Branch. “Riley is a talented young defenseman who brings skill, intelligence and competitiveness to the Firebirds, which will add to the present and future success of our program. We would also like to wish Nicolas Mattinen every success moving forward and thank him for his time with the Firebirds.” 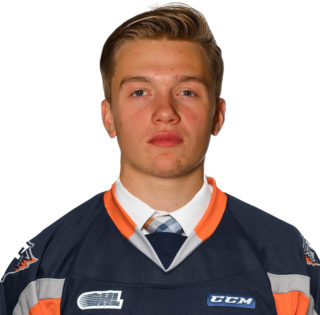 Last season, the defenseman racked up 32 points, scoring 10 goals and adding 22 assists in 42 games with the St. Catharines Falcons of the Greater Ontario Junior Hockey League (GOJHL). Additionally, he notched 14 points in 15 playoff games. McCourt played his AAA hockey with the Niagara North Stars where he earned 20 points (9G, 11A) in 33 games.

“Just excitement. With all the young talent on the Firebirds’ roster, it’s an exciting time to be moving to Flint,” said McCourt. “From the fans, to their facilities, to their billets, I’ve heard nothing but great things about the Firebirds and how professional everything is conducted. I’m happy to play a part in the future of this hockey club.”

McCourt was selected by Hamilton in the third-round (45th overall) of the 2016 OHL Priority Selection. He comes to Flint with more than two years of eligibility remaining, having played in 35 OHL games. The 5-foot-11, 185-pound defenseman is a native of St. Catharines, Ont.

McCourt is expected to join the Firebirds for practice in Flint tomorrow, Jan. 10.